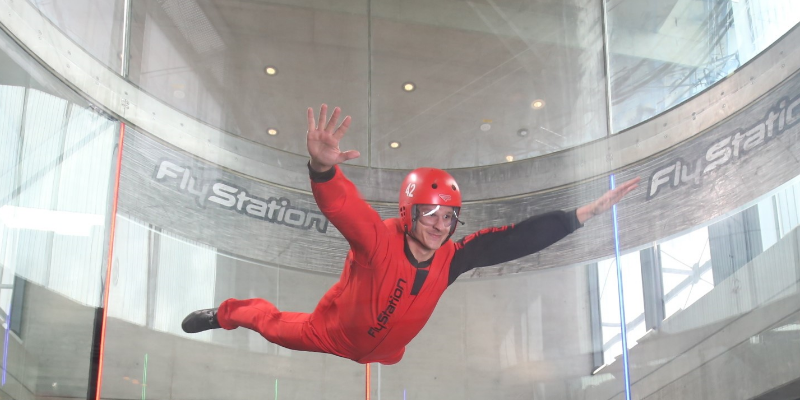 “Flying” with Evernine – A company event with unforgettable moments

The german youth word “being fly” will be a good match for the emotions of this year’s summer company event. Together with the team we went to Flystation Munich in July. We all fell into the frenzy of flying – without a parachute.

On the 12th of July it was finally time. The annual company event of Evernine Group was on the agenda. And this time our colleagues surprised us with a somewhat different event location. We went to the Flystation Munich. A wind tunnel, better said a round flight chamber with a diameter of 4.5m and a total height of 20m, in which the air pests with up to 300km/h around the ears. A flight time of 2 minutes per person in this channel corresponds to a free fall of a parachute jump from several thousand meters.

“The Flystation Munich was a special location for our company event. With a glazed flight chamber and a mix of adrenalin and fun we made our summer party something special. We will certainly talk about this for a long time to come.”

We are all familiar with this – in everyday working life it is ideally a case of having both feet firmly on the ground. During this company event, however, we wanted to lose the ground under our feet. In the Flystation Munich you don’t have to do a parachute jump to experience the feeling of flying. In a modern wind tunnel we had the opportunity to experience the same feelings as parachuting for less money and less courage – and even safer. At least that’s the statement of those who haven’t jumped out of an airplane yet. Sharing this feeling with colleagues was unique.

Taking off together connects

No matter whether small or large, sporty or comfortable – it became clear at our team event that indoor skydiving or bodyflying really appeals to everyone. The shared trembling with excitement in the waiting zone; the adrenaline that shoots through your whole body as soon as you enter the wind tunnel; the cheering of the spectators outside who cheer with you, and above all the weightlessness – we all felt the same. And that connects us.

“Our summer event this year was something very special. Not like a typical company event á la climbing garden or cooking together. To share this feeling of floating and flying with each other and to overcome one’s own limits together – that’s what totally connected us”.

The company event of a special kind

In addition to an introduction to the new Evernine portfolio and a preview of the current image film, a first look at the relaunched website www.evernine-group.de in a top-equipped conference room at Flystation rounded off the “general” part of the event. But actually everyone was even more excited about the second part of the event. Bodyflying in the wind tunnel.

“Bodyflying was an excellent idea for the Evernine team to make the company event a little more exclusive than in previous years. Not only the experience itself, floating in a free fall in the wind tunnel, was worth making such an event possible for the colleagues. The enthusiasm among the colleagues was also worth it! Now, of course, the pressure is growing to choose something similarly exciting for next year”.